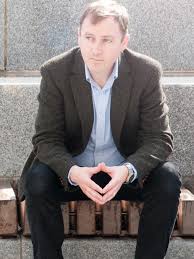 Born in Inverness in 1976, Stuart MacRae has established himself as one of the most distinctive composers working today, writing music of elemental power and emotional subtlety. Equally at home writing opera, orchestral music, chamber music and music for choirs, his works take listeners on a journey through perceptions of nature, striking imagery and the landscape of human emotion.

His numerous staged works range from Echo and Narcissus, a dance-opera premiered at Royal Opera House Covent Garden in 2007, through to 2015’s critically acclaimed The Devil Inside for Scottish Opera and Music Theatre Wales. Ghost Patrol, written in collaboration with writer Louise Welsh, won the 2013 South Bank Sky Arts Award for Opera and was shortlisted for an Olivier Award.

Numerous works by MacRae have been performed at the Edinburgh International Festival and BBC Proms, including his 2001 Violin Concerto which had its world premiere at the BBC Proms and has been performed by Tasmin Little, Christian Tetzlaff and Tedi Papavrami.

His music has been recorded for NMC, Black Box, Delphian, Kairos and the London Sinfonietta’s own label.

Recent works include Cantata (2016), for the Choir of Gonville and Caius College Cambridge, Piano Sonata No.2 (2016) for Simon Smith, and Sunrises (2017) for the Gould Piano Trio. From 2017 he is Composer in Association at the Lammermuir Festival.

His newest opera, Anthropocene, premiered in February 2019 with Scottish Opera to a wealth of 4- and 5- star reviews from the press. Described as “enthralling” (Daily Telegraph), “evocative” (The Times) and “a wonder of skillful orchestration” (The Guardian), Anthropocene, which is MacRae’s fourth collaboration with librettist Louise Welsh, toured to Theatre Royal Glasgow, King’s Theatre Edinburgh, and the Hackney Empire in London. It is revived in the 19/20 season by the Salzburger Landestheater, and was nominated for a 2020 Internationl Opera Award for Best New Work.