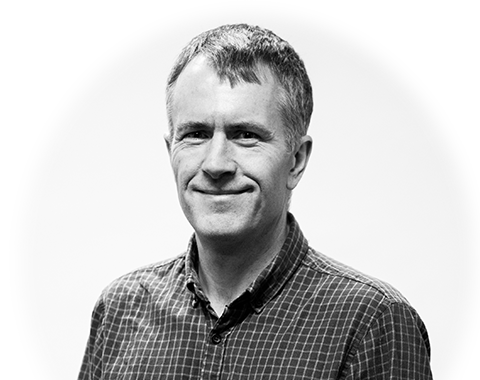 Lecturer and Director of the Electroacoustic Studios

Alistair MacDonald is a composer & performer based in Glasgow. Much of his work is collaborative; working with performers, artists and choreographers from different media and backgrounds, he makes work for performance, broadcast and installation internationally.

Current projects include: The Last Post with trumpet player Tom Poulson and director Susan Worsfold commissioned by the St Magnus Festival 2016 and selected for the Made in Scotland showcase at the Edinburgh Fringe 2017;Strange Rainbow, a live electroacoustic duo with Scottish harp player Catriona McKay (performances include Celtic Connections, sound festival in Aberdeen and the Norwegian Film Festival); and work with Carrie Fertig, on music for glass percussion, electronics and live flame-working, including Le Sirenuse, selected for the Royal Scottish Academy Open Exhibition 2015 and Flames and Frequencies selected for the Coburg Prize for Contemporary Glass 2014.

The Imagining of Things with Brass Art (video and audio installation) for Huddersfield Art Gallery and the Huddersfield Contemporary Music Festival, Mitaki (string quintet and live electronics) for the Scottish Ensemble, and a number of acousmatic works; Interactive, performative installation Sensuous Geographies, in collaboration with Sarah Rubidge (shown in the UK and USA) awarded a Creative Scotland Award in 2002; Silver Wings and Golden Scales (2007), an installation in collaboration with Jennifer Angus, commissioned for the Chazen Museum of Art in Wisconsin; SeaUnsea (2006), an interactive dance and video work with programmer Chiron Mottram, choreographer Carol Brown and architect Mette Ramsgard Thomsen premiered at Dance Umbrella 2006 at the Siobhan Davies Studios.

He teaches composition and directs the Electroacoustic Studios at the RCS where he was made a Fellow of the Royal Conservatoire in 2012 and Professor in 2017.